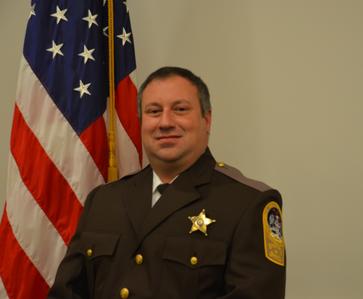 Chief Deputy William R. Balderson, “Rob”, is a native of Essex County, Virginia.  He is a  graduate of Essex High School.  He earned an Associate's Degree in Criminal Justice from J. Sargent Reynolds Community College in Richmond, Virginia and a Bachelor’s of Science Degree in Criminal Justice from Liberty University in Lynchburg, Virginia. He is currently working towards his Master’s Degree in Public Administration from Liberty University. Chief Deputy Balderson began his career in Law Enforcement in 1997 with the Department of Corrections where he served in several positions within the security section. In 1999, Chief Deputy Balderson started his career with the King and Queen County Sheriff’s Office under Sheriff E.C. Walton. During his Career with King and Queen County Sheriff’s Office he has served in several positions which include Patrol, School Resource Officer, DARE Officer, General Investigations, Criminal Investigations, Drug Investigations,  and Lieutenant.  In 2010 after Sheriff Charboneau was elected, Chief Deputy Balderson was promoted to his current position as Chief Deputy.

During his Law Enforcement career he has become a general instructor through the Department of Criminal Justice Services.  He is an instructor through ALERRT (Advanced Law Enforcement Rapid Response Training) in Active Shooter Level I and II, Erase (Exterior response to active shooter events), and CRASE (civilian response to active shooter events). He is also an instructor from ASP in expandable baton and handcuffing.  He is an instructor in Incident Response to Terrorist Bombing and Response to Suicide Bombing from the Department of Homeland Security and the New Mexico Tech University where he participated in explosive practical’s in the university’s explosive lab in the mountains of New Mexico.  He is a member of the Virginia Forensic Science Academy Alumni. He graduated from the prestigious Virginia Forensic Science Academy put on by the Virginia Department of Forensic Science in Richmond, Virginia. Chief Deputy Balderson has attended numerous conferences and training in Leadership, Tactics, Modern Policing, Community Policing, and Legal Issues in Law enforcement.

Chief Deputy Balderson is responsible for the daily operations of the King and Queen Sheriff’s Office to include Patrol, SRO’s, and ACO, Investigations, Civil Process, Court Security, and Dispatch. He also participates in all strategic planning and responses to incidents within the county. He works alongside Sheriff Charboneau in the administrative planning of the department’s budget, policies and procedures, and future departmental projects. Chief Deputy Balderson’s responsibilities also include the department’s personnel, training, and logistics.

Chief Deputy Balderson’s passion within Law Enforcement is stopping the cycle of recidivism and by introducing programs to the youth to give them a better chance of success in life through positive Law Enforcement relationships. “The cycle must be broken and the relationship with the community must be mutual and respect driven.”